As you’ve probably heard, Microsoft announced next generation of Windows Phones – named Windows Phone 7 Series. I am so excited about it (as an user and as enthusiast) so I decided to write one blog post and list some cool links (instead of repeating what others have said already). Here they are

There is entire newsroom in Microsoft News Center devoted to Windows Phone. Inside it you can find all kinds of stuff, and you must see:

If you want to find out more from end user perspective, visit www.windowsphone7series.com. It also contains links to other news sources and articles about Windows Phone 7 Series, as well as mentions on social networks. If you register and enter backstage, you can access forums and other exclusive content for registered users

Next, several blogs need to be mentioned about next generation of Windows Phone. First, there is one introductory blog post on Windows Phone Team Blog which outlines basic concepts about Windows Phone 7 Series and describes hubs. Second, if you are a developer, follow Charlie Kindel on twitter @ckindel or read his blog http://blogs.msdn.com/ckindel

People on Channel 9 also did their part of the work, and posted First Look Hands on Demo video here http://channel9.msdn.com/posts/LauraFoy/First-Look-Windows-Phone-7-Series-Hands-on-Demo

I couldn’t resist the temptation to post at least one of cool screenshots for hub start pages. You can find screenshots of people hub and music+video hub here, and all of the hubs here. I decided to post screenshot of the pictures hub . It looks so cool :) 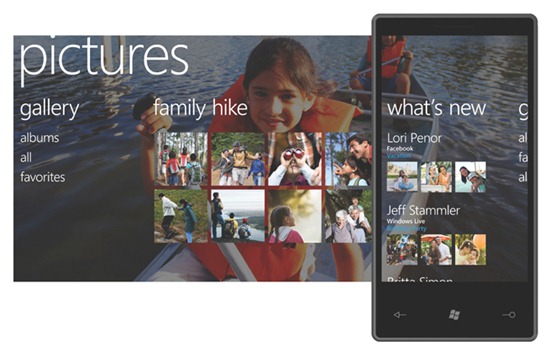 If you are on twitter, you can search for #WP7 in order to find out more about what the people say about the Windows Phone 7.